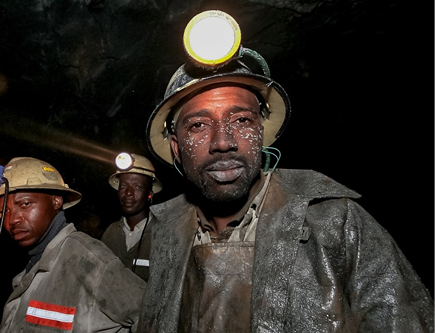 The mining sector plays a significant role in the economic growth of Southern Africa. The Republic of South Africa has both the highest number and largest mines in the regions. In South Africa, mining is estimates to a USD1.8 million trillion sector, contributing about 8.6% of South Africa’s total annual gross domestic product (GDP). There are about 2,000 registered mining companies in South Africa, and they employ more than 500,000 mine workers. Approximately 40% of the mine workers come from the neighboring countries of Lesotho, Swaziland, and Mozambique.

Mine workers in the southern Africa sub-region have one of the highest TB incidence rates in the world. In South Africa, TB incidence is 2500- 3000/100,000 among mine workers— more than three times higher than in the general population (948/100,000) and more than ten times higher than the WHO threshold for characterizing a TB emergency (250/100,000). Mine workers are exposed to a multitude of factors that compound their risk of TB infection. These risk factors include their working conditions (prolonged exposure to silica dust, poor ventilation, exposure to occupational injuries); socio-economic factors (migrant status, cramped and unsanitary living conditions, lack of knowledge of the health system or their rights regarding access to care); and their disease burden (co-exposure to HIV, silicosis, or both). Mine workers frequently travel across provincial and national TB infection in labour-sending areas, and also adversely affects mine workers’ adherence to TB treatment, which contributes to the incidence of drug resistant TB.

lung diseases in the mining sector and mapping of main civil society actors in ten countries in the Southern Africa region. The objective of the survey was to identify human rights and gender barriers to access to TB, TB/HIV and Occupational Health Services, and to compensation for those eligible mineworkers, ex-mineworkers, their families and communities around them the mines as well as those in labor sending areas. The survey would inform the development of appropriate interventions to address the barriers identified.

Access To Health And Social Services For Vunerable Children